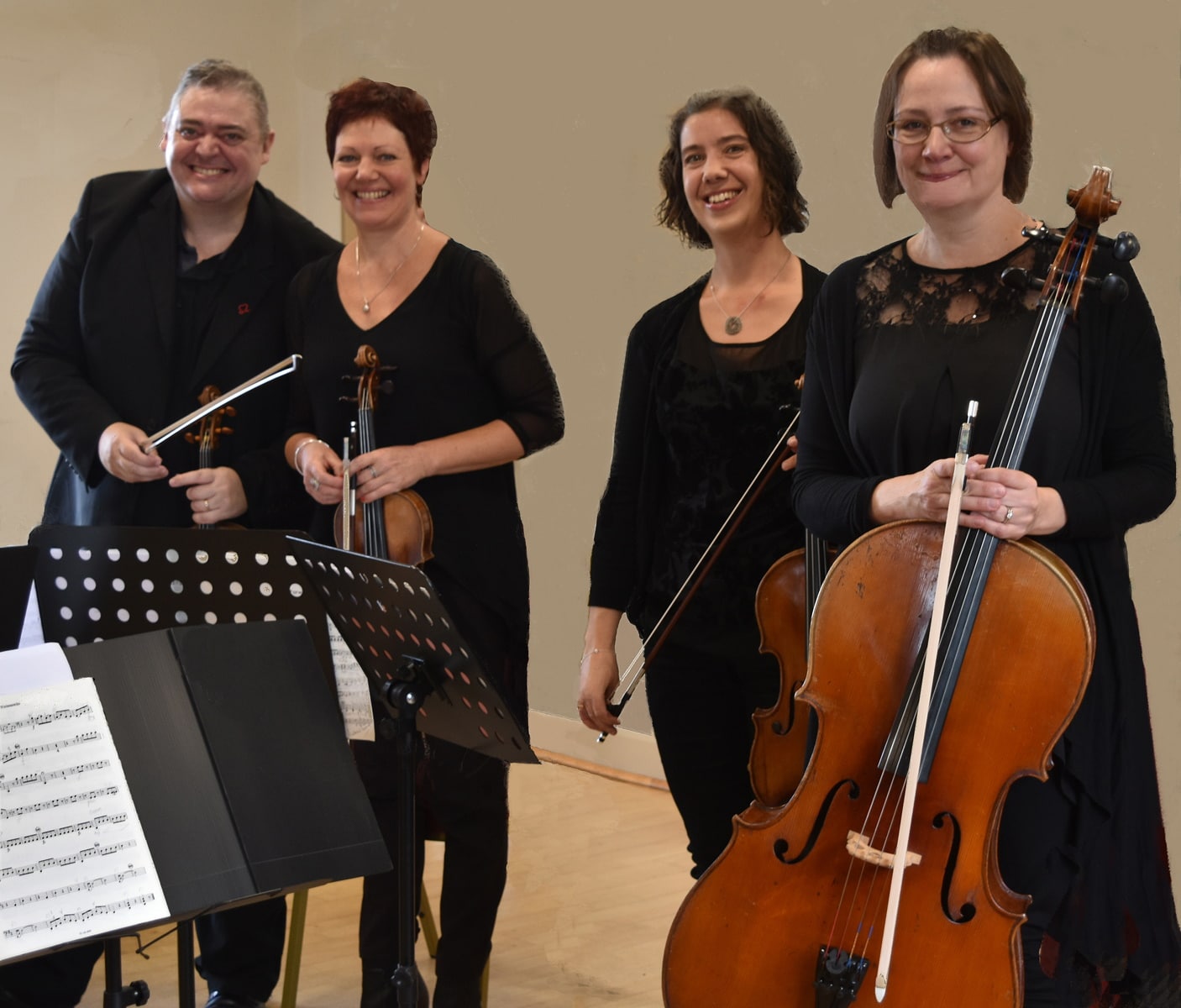 They are all members of the Leeds-based orchestra of Opera North, which also serves as Yorkshire’s only professional symphony orchestra. Andy is the associate leader of the orchestra.

After leaving his position as Assistant Leader with the Royal Liverpool Philharmonic Orchestra Andy Long is now the Acting Co-Leader of Opera North and the Leader of the New World Ensemble.

As a soloist he has given concerto and recital performances throughout Britain, Norway, the Czech Republic, Germany, Belgium, and Poland where he gave a live televised performance of Elgar’s violin sonata. He is also a regular recitalist at the Duke of Westminster’s country home.
Andy led the Performing Arts Symphony Orchestra for many years where he regularly performed concertos and solos to audiences of over 16,000 people and was a tutor at Chetham’s School of music for 15 years as well as at Manchester University. He also taught privately for Sir Yehudi Menuhin and was invited to accept a post at his specialist music school.

Andy is a keen exponent of contemporary music and with his quartet and ensemble has commissioned many new works and recorded CDs on the Naxos, ASC and Campion labels. In 2016, Naxos recommended his New World Ensemble’s recording of Kevin Malone’s “Eighteen Minutes” as one of their Top 20 tracks from their catalogue of 1.9 million to choose from. His recent commission of Malone’s new violin concerto “A Day In The Life” has been performed several times to critical acclaim by Andy and the Orchestra of Opera North and there are plans to take it to the Ukraine and the United States.
On a lighter and more unusual note, Andy conducts, arranges for and presents the Andy Long Orchestra where he indulges his passion for the light music and easy listening genre. He has a library of light music numbering into the many thousands and is dedicated to upholding the tradition of British Light Music.
His landmark recording with Ian Buckle of music for violin and piano by Sir Edward German is available worldwide on the Naxos label and includes previously unrecorded material. A recording of the violin sonatas of Humphrey Procter-Gregg is due for release in 2019.

Katie New gained a Countess of Munster Award at the age of 15 to study the violin with Jaroslav Vanecek. Her enthusiasm for chamber music developed as she attended many chamber music courses at Westonbirt, Pro Corda and the Britten Pears School. She won a scholarship to the Royal college of Music in 1984, continuing her studies with Professor Vanecek and winning the Leonard Hirsch Prize for violin. Subsequently she was awarded a scholarship to study chamber music at the Banff Centre for the Arts in Canada.

Since finishing her studies she returned to the UK and worked with the London Symphony Orchestra, the BBC National Orchestra of Wales, the BBC Philharmonic Orchestra and the Ulster Orchestra where she was offered the No 3 first violin chair. However she chose instead to join the Orchestra of Opera North in 1991 and has been Section Principal of the second violins for the past 16 years.  When not playing, she enjoys her time with her three children and walking in the Yorkshire Dales with their collie.

Anne Trygstad was born in Perth, Scotland. She studied at St.Mary’s Music in Edinburgh before going to the Royal College of Music to study with Ian Jewel of the Gabrielli Quartet. Whilst at the RCM Anne was a founder member of the Rosendale Quartet who went on to win the Susan Connelly Prize for Chamber Music. They regularly performed around the country for Music Clubs and Festivals such as the Lake District Summer Music Festival. The Rosendale Quartet were coached by the members of the Chilingirian Quartet and subsequently Anne was invited by Levon Chilingirian to play chamber music at the Mendelssohn on Mull Festival two years running. After attaining her PG Diploma at the RCM Anne was Principal Viola of the inaugural year of Southbank Sinfonia and Principal Viola of the World Youth Orchestra. She has played with the Royal Liverpool Philharmonic, Royal Scottish National Orchestra, Scottish Opera, the Hallé and BBC Scottish Symphony Orchestra. Anne enjoys teaching and taught viola and chamber music at Yorkshire Young Musicians and Pro Corda chamber courses. She has coached the violas on the Opera North Orchestra Academy summer courses.

Anne is Sub-Principal Viola of the Orchestra of Opera North and has been a member of the orchestra since 2005. She lives in a beautiful village outside of Huddersfield with her two children and loves baking, gardening and running on the moors.

Zöe studied cello at the Guildhall School of Music and Drama with Stefan Popov for four years, during which time she won the Elsie Doris Moss Memorial Prize for concerto performance. It was at this point that she formed a renowned cello quartet which performed extensive outreach and mainstream recitals for several years.
Following on from this she trialled with the Royal Ballet Sinfonia, the BBC National Orchestra of Wales and the BBC Philharmonic where she later took up a short term contract as a full time member.

More recently Zöe has performed many concerts with the New World String Quartet and Trio, and recorded three CDs of British Contemporary music with them.
She is now a full time member of Opera North and continues to enjoy many chamber music commitments.

Their recent recording of Kevin Malone’s ‘Eighteen Minutes’ has been chosen by Naxos as one of their Top Twenty Tracks from their catalogue of over two millions.