Unfortunately, guitarist Adam Brown (whose photo is still shown below) was involved in an accident less than a week before
the date of this concert and has been replaced by Jacopo Lazzaretti. You will find information about Jacopo below. 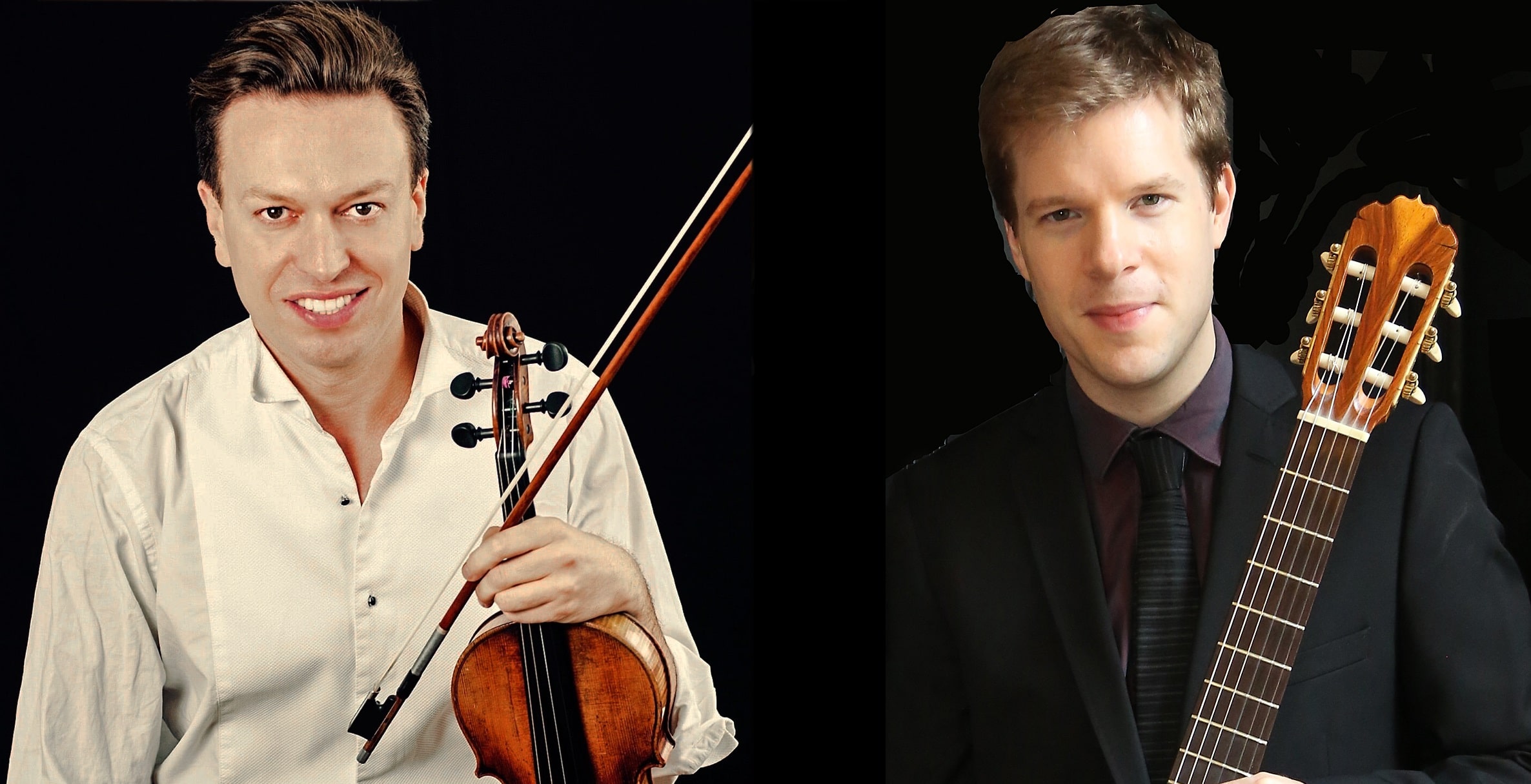 Owing to Adam’s unfortunate accident, there is a possibility that the programme shown below may be changed on the night.

Praised by Strad magazine as a “poised and calmly confident player”, Shlomy Dobrinsky is a London based concert Violinist and recording artist. Shlomy has won various prizes at international violin competitions, including the Lipizier in Italy, the Unisa in Pretoria and the Philharmonia/MMSF Concerto Award which granted him an invitation to debut with the Philharmonia Orchestra. As a chamber musician, Shlomy performed at the most prestigious concert halls including The Wigmore Hall and South Bank Centre, London.

Achieving a Masters degree at the Guildhall School of Music and Drama after his undergraduate degree at The Royal College of Music, Shlomy went onto perform with some of the world’s finest orchestras such as the Philharmonia Orchestra and Israel Philharmonic Orchestra. As an orchestra player, Shlomy was a member of the Philharmonia Orchestra for 11 years and now mainly works with The London Symphony Orchestra. Currently an Associate Leader of Oxford Philharmonic Orchestra, Shlomy also enjoys co-leading The Royal Scotish National Orchestra, BBC Scottish Symphony Orchestra and the English Chamber Orchestra amongst others.

Born in Rome in 1994, Jacopo Lazzaretti has been studying classical guitar since he was 11. During his studies, he has performed in many masterclasses with some of the worlds most well-known guitarists such as Oscar Ghiglia, Marcin Dylla, Pavel Steidl, Giulio Tampalini, Lorenzo Micheli, Carlo Marchione, Rene Izquierdo just to name a few. In 2015-2016, thanks to the Erasmus+ he studied with Matthew McAllister at the Royal Conservatoire of Scotland and in July 2017 he graduated from the Conservatoire of Santa Cecilia in Rome under the guidance of Arturo Tallini, receiving his First Class Bachelor Degree in Music with Honours. In June 2019 he completed the Masters Degree in Performance at the Royal Conservatoire of Scotland under the guidance of Matthew McAllister and Professor Allan Neave.

Jacopo has played in many concerts for several Music Festivals in Italy as well as abroad in Istanbul, Glasgow, Edinburgh and other Scottish cities.
Jacopo has become an artist for ‘Live Music Now Scotland’ in January 2018.