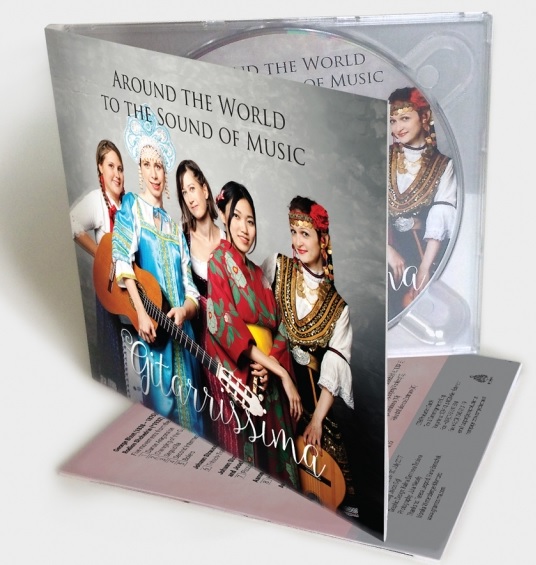 Gitarrissima – This unique ensemble of five young female guitarists from Bulgaria, Hungary, Russia, Japan and Austria have been enchanting a steadily growing international audience with their sensitive musical interplay and virtuoso performances. In 2014 they won 3rd Prize and the special Audience Prize at the 3rd International Competition for Guitar Ensembles in Aschaffenburg, Germany, impressive proof of their musicality when they excited both the professional jury and the audience with their performances. Thanks to their unusual line-up – the quintet consists of an octave guitar (Olga Dimitrova), three concert guitars (Réka Mihalovics-Zottmann, Antonina Ovchinnikova and Ayako Kaisho) and an acoustic bass guitar (Emily Smejkal) – and their original arrangements, the ensemble is breaking new ground in the genre of classical guitar music. They create a refreshingly original sound which gives a new dimension to popular classical works as well as less well known compositions. The Quintet is characterized by a wealth of musical colour and an orchestral density which is rarely heard. One former member of the ensemble, Krisztina Groß Dobó is responsible for almost all of the arrangements, which combine cleverly balanced voicings with an airy transparency and make ingenious use of the entire range of playing techniques including percussive effects.The current line-up inherits the legacy of Gitarrissima, which was founded and built with a devotion and love to the music and to the guitar over the past seventeen years. Soon after formation in the year 2001, they were Prize-winners at the International Guitar competition “Open Strings” 2002 in Osnabrük, Germany, which led them to performances in Germany, Austria, Taiwan, China, Luxemburg, Italy, England, Croatia, Hungary, Mexico, Estonia and Turkey.

Due to unprecedented demand

NO FURTHER TICKETS
WILL BE SOLD

in order to guarantee seats for all our members
and those who have already purchased tickets.

Antonina Ovchinnikova was born in Kamensk-Uralskiy, Russia. Completed Studies at the Music college “Gnesiny” by Alexander Vinitskiy and at the Academy of Music “Gnesiny” by Dmitriy Illarionov and Dmitry Murin. Since 2011 Concert Studies at the University of Music and Performing Arts Vienna by Prof. Alexander Swete. 2015 Bachelor Diploma with distinction. 2015 debut at Wiener Musikverein, Austria, as a participant of the concert “Students of MDW”. Participation in master classes with Goran Krivokapic, Marcin Dylla, Lucio Matarazzo, Zoran Dukic, Petrit Çeku, Michal Nagy and Sanel Redžic. Winner of a 3rd prize at the International Guitar Competition “Guitar Virtuosos” in St. Petersburg, Russia. Winner of a 3rd prize at the International Guitar Festival in Sarajevo, Bosnia and Herzegovina. Prize-winner of the Summer Academy “Allegro Vivo” in Horn, Austria. CD recording together with the quartet “Consonance” (VP Music Media, Italy). Performances in Russia, Estonia and Austria as a soloist, together with the “Kaluga Municipal Chamber Orchestra” under the direction of A. Levin, as well as a member of the Quartet “Consonance”. Member of Gitarrissima since 2014.

Maria Benischek is a founder member of Gitarrissima. Maria was born in Melk, Lower Austria. First guitar lessons at the age of 6. Preparatory course at the University of Music and Performing Arts Vienna at the age of 10. Successful participation in several competitions „Prima La Musica“. Classical Guitar Studies with Konrad Ragossnig and Eugenia Kanthou at the University of Music and Performing Arts Vienna. Numerous performances with different ensembles. 2005 – 2010 member of Gitarrissima (concert guitar) and again since 2018 (acoustic bass guitar). Performances with Gitarrissima throughout Europe, in Mexico and Taiwan. CD recording together with Gitarrissima („Tales & Dances” 2005). Tonight Maria replaces fellow Austrian Emily Smejkal who recently had twins.

Réka Mihalovics-Zottmann  was born in Budapest, Hungary. Completed Guitar Studies at the Béla Bartók Conservatory in Budapest with Prof. Sándor Szilvágyi. Completed Concert Studies, Instrumental and Vocal Pedagogy and Pop Guitar Studies at the University of Music and Performing Arts Vienna with Prof. Walter Würdinger, Prof. Brigitte Zaczek and Arnoldo Moreno. A member of the Charity Program of the International Yehudi Menuhin Foundation “Live Music Now”. Participation in master classes with József Eötvös, Ede Roth, Prof. Alexander Swete, Prof. Ahmed Baluch, Marcyn Dylla, Prof. Alvaro Pierri and Zoran Dukic. Performances together with the “Hungarian Guitar Orchestra” under the direction of Ferenc Fodor. Since 2006 numerous performances with Gitarrissima in Germany, Italy, England, Croatia, Austria, Taiwan, Montenegro, Bulgaria, Spain, Mexico and Estonia. Winner of one 1st and one 3rd Prize at the National Guitar Competition in Hungary. Winner of a 2nd Prize at the Conservatory Internal Competition in Hungary. Member of Gitarrissima since 2006.