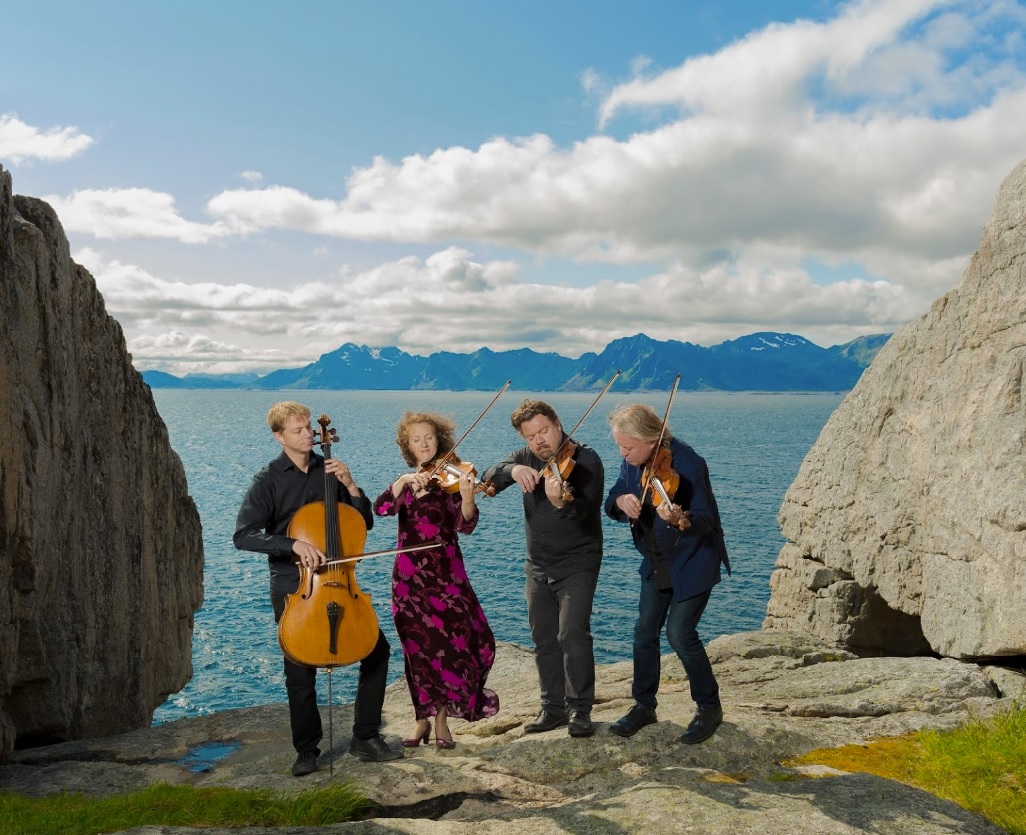 Formed under the midnight sun in Lofoten in 2006, the Engegård Quartet has rapidly become one of Norway’s most sought after ensembles. Their bold, fresh interpretations of the classical repertoire combined with a deep attachment to their Scandinavian roots has attracted international acclaim, and inspired some innovative partnerships and programming. The quartet’s debut CD was praised as ‘breath-taking’ in The Strad, while their second release won Pizzicato magazine’s ‘Supersonic Award’. Their recent CD of works by Grieg, Sibelius and Olav Anton Thommessen was praised by Tully Potter in Music Web International as ‘what Grieg lovers have been waiting for’.

Arvid Engegård was born in Bodø, North Norway in 1963. When he was eleven, Arvid led his first string quartet in concerts throughout Norway, and gave his first solo performance with orchestra in Mozart’s Piano Concerto KV 488. At the age of fourteen, Engegård won the Norwegian television Ole Bull Competition leading to concert tours of America. Arvid took his instrumental diploma at the Trondheim Conservatory aged sixteen. At the same time he was soloist with the Trondheim Symphony Orchestra and Oslo Philharmonic as a Norwegian Young Concert Artist. Arvid continued his violin studies at the Eastman School of Music in Rochester, New York, where he won the school’s competition to perform as soloist with the Rochester Philharmonic. Whilst in America, Engegård participated in masterclasses with, amongst others, Isaac Stern. Engegård appeared as soloist with Oslo Philharmonic performing Vieuxtemps’ Fifth Violin Concerto before going to study with Sándor Végh in Salzburg. A year after his arrival, Arvid was invited by Végh to lead Camerata Academica, a position he kept for eight years. Among many performances as leader and soloist with Camerata Academica, Arvid performed Mozart’s Violin Concerto No. 4 in Vienna’s Musikverein. He also recorded the complete Divertimentos by Mozart (including several violin solos most notably the Haffner Serenade), as well as the complete Piano Concertos by Mozart with András Schiff. During the same period Engegård recorded Bartók Contrasts for Decca. In 1991 Engegård was invited to be the leader of the Orlando String Quartet. The quartet was resident in Holland and performed regularly throughout Europe. Recordings from this period include Schnittke’s Third String Quartet, written for the Orlando String Quartet, Isang Yuns’ String Quartet, and quartets by Haydn, Mozart, Grieg and Shostakovitch. Arvid Engegård has appeared regularly at some of Europe’s most prestigious chamber music festivals, including Lockenhaus, the Salzburg Festival, Musiktage Mondsee, Mozartwoche, and the International Musician’s Seminar in Prussia Cove. Since 1999 Arvid has developed a considerable career as a conductor. Orchestras he has worked with include Camerata Bern, the BBC Concert Orchestra, Mozarteum Orchestra Salzburg, Camerata Academica Salzburg, Winterthur Symphony Orchestra, Ljubliana Philharmonic, Maribor Symphony Orchestra, Belgrade Philharmonic, Swedish Radio Orchestra, Swedish Chamber Orchestra, Camerata Roman, Musica Vita, Oslo Philharmonic, Norwegian Radio Orchestra, Norwegian Chamber Orchestra, all the army bands in Norway, Stavanger Symphony Orchestra, Trondheim Symphony Orchestra, Tromsø Symphony Orchestra and Bergen Philharmonic. Engegård is also in demand as a violin soloist; recent performances include solo appearances with Stavanger Symphony Orchestra, the Bergen Philharmonic, the Norwegian Radio Orchestra, Nordkøping Symphony Orchestra and Camerata Bern. Arvid Engegård is the Artistic Director of Lofoten International Chamber Music Festival. In 2000 he was awarded the Nordlys Prize. For the last 10 years, his main activity has been the Engegård Quartet.

Violinist Alex Robson was born in England. Alex moved to Norway when he was three years old, and he began learning the violin at an early age. He studied the violin with Bjarne Fiskum at the Institute for Music at NTNU in Trondheim and at the Royal College of Music i London with Levon Chilingirian. From 2002 until 2005 Alex was principal second violin with Norrlandsoperaen in Umeå, Sweden, a position he also held at Camerata Nordica in Småland. Alex performed regularly with the Mahler Chamber Orchestra including tours with conductors Daniel Harding and Esa Pekka Salonen. In addition to his work with the Engegård Quartet, Alex leads the Kristiansund Festival Quartet for the annual arts festival in Kristiansund. He is also in frequent demand as a freelance violinist. For the past 25 years he has been a regular member of the Trondheim Soloists, both as artistic director and leader. Freelance engagements have seen him working with orchestras such as the Swedish Chamber Orchestra, Gothenburg Symphony Orchestra, Bergen Philharmonic, Bodø Sinfonietta and the Bit20 ensemble in Bergen and Ensemble Noor in Alta, northern Norway.  Since 2008 he has been a regular member of the Norwegian Chamber Orchestra. Alex has performed with artists such as Barbara Hendricks, Anne-Sophie Mutter, Joshua Bell, Leif Ove Andsnes, Ole Edward Antonsen, Tine Thing Helseth, Arve Tellefsen, Morten Harket, Sissel Kyrkjebø, and Jon Lord. Living in Trondheim, Alex has been involved in coaching chamber music at the Institute for Music at NTNU. He plays a Jean Baptiste Vuillaume violin fra 1858, on generous loan from Dextra Musica.

Juliet Jopling studied at the Mozarteum in Salzburg with Thomas Riebl, with Ferenc Rados at the International Musicians’ Seminar at Prussia Cove, and with David Takeno while at Trinity College, Cambridge. As a Scholar at the Royal College of Music, Juliet was awarded the Peter Morrison Concerto Prize and Honours in her Performing Diploma in 1990. During her studies, Juliet was supported with awards from the Martin Trust, the Craxton Memorial Trust, South East Arts, The Countess of Munster Musical Trust and the Ian Fleming Memorial Awards. In 1992, the Martin Trust awarded Juliet the Trevor Snoad Prize, and Juliet was a prizewinner in both the 1997 and 2000 Lionel Tertis International Viola Competition. Juliet was a Young Concert Artist 2000 for The National Federation of Music Societies, and has been invited to perform in the Countess of Munster’s Young Artist Recital Series and for Live Music Now! Juliet lead Essex Schools String Orchestra before changing to the viola, when she joined the National Youth Orchestra and then the European Community Youth Orchestra. At the Royal College of Music, Juliet was Principal Viola of the String Ensemble, touring under Rodney Friend. While at Cambridge, Juliet was Principal Viola of the Cambridge University Chamber Orchestra, and started working professionally in London. Juliet has worked with the Chamber Orchestra of Europe, Ensemble Modern (Frankfurt), London Mozart Players, the English Chamber Orchestra and Britten Sinfonia, and has appeared as Guest Principal Viola of Camerata Academica – Salzburg, the Opera de Rouen, and Dresden Symphony Orchestra. Since moving to Oslo in January 2004, Juliet has been Guest Principal Viola with the Norwegian Chamber Orchestra, the Oslo Philharmonic Orchestra and The National Radio Orchestra, and is the Principal Viola in the Norwegian Opera and Ballet Orchestra. Miss Jopling has appeared as a soloist with many orchestras, including the Philharmonia under Jan Latham Koenig, the Norwegian National Radio Orchestra under Arvid Engegård, and the Norwegian Opera and Ballet Orchestra under Rinaldo Alessandrini. Solo and chamber music broadcasts for BBC Radio 3, and radio stations throughout Europe, include a live broadcast of Walton’s Viola Concerto for Classic FM. A passionate chamber musician, Miss Jopling was a founding member the Sándor Végh Ensemble, which had a residency in Vienna’s Musikverein, and of the Quince Quartet, prizewinners in the 2004 Banff International String Quartet Competition. Juliet founded and directed Kerry’s International Chamber Music Festival from 1998 until 2009. She is the founder and artistic director of Oslo Quartet Series, an international quartet subscription series founded in 2012, and conducts Nordberg Strykeorkester, a neighbourhood children’s orchestra which now has over 90 members. Together with her partner Arvid Engegård, Atle Sponberg and Jan Erik Gustafsson, Juliet formed the Engegård Quartet in 2006. Juliet plays on a Giuseppe Guadagnini from 1770.

Born in Austria in 1982, cellist Jan Clemens Carlsen studied with Hans Josef Groh at the Barratt-Due Music Institute and Prof. Heidi Litschauer at the Universität Mozarteum in Salzburg, where he also had lessons with the Hagen Quartet. In 2004 he won a place at the Folkwang-Hochschule in Essen to study for his Diploma with Prof. Christoph Richter. From 2006 to 2008 Jan Clemens was a pupil of Truls Mørk at the Norwegian Music School, and has since worked there periodically as his teaching assistant. In 2008 Jan Clemens came 2nd in Princess Astrid’s music prize, and has won awards in both the Norwegian string championship and the ConocoPhillips competition. He has taken part in many festivals as a soloist and chamber musician, including the Kuhmo Chamber Music Festival (Finland), the Hardanger Music Festival, the Sonoro Festival (Bucarest), the Lofoten International Chamber Music Festival, Festspillene i Bergen and the St. Magnus Festival (Orkney). Since 2013, Jan Clemens Carlsen has been cellist with the Engegård Quartet, with whom he has made a number of highly-acclaimed CDs and collaborated with many leading musicians, including András Schiff, Leif Ove Andsnes, Lukas Hagen, Marc-Andre Hamelin, Jean Efflam Bavouzet, Jan-Erik Gustafsson, Håvard Gimse, Steven Tennenbaum, Daniel Phillips, Marianne Beate Kjelland, Christian Ihle Hadland, Monika Leskovar, Emma Johnson, Marianna Shirinyan and Nils Anders Mortensen. Jan Clemens plays a Giacomo Zanoli cello made in 1737, generously loaned to him by Dextra Musica.