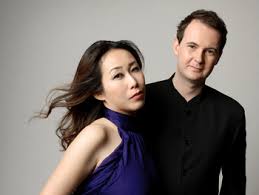 Widely regarded as one of the U.K.’s leading piano duos, Piano 4 Hands are regular performers at London’s Wigmore Hall and South Bank Centre. Joseph Tong and Waka Hasegawa were prize winners at the 2003 Tokyo International Piano Duo Competition and at the Schubert International Competition in the Czech Republic. The duo has given recitals in Japan, Germany, Spain and the USA as well as live broadcasts for BBC Radio 3 and WFMT Radio in Chicago.

Since their critically acclaimed London debut for the Park Lane Group in 2002, Joseph Tong and Waka Hasegawa have given a number of successful Wigmore Hall recitals promoted by the Kirckman Concert Society, (the Society promotes young artists of exceptional talent and provides them with a platform at a major London venue). Piano 4 Hands has performed at many of the major concert venues around the UK including Bridgewater Hall in Manchester, St David’s Hall Cardiff, St George’s Bristol and the Turner Sims Hall in Southampton and also at festivals such as Buxton, Cheltenham, Bury St Edmunds, Chichester, Dulwich, Guildford and York.

Piano 4 Hands debut CD of Debussy piano duets for Quartz was chosen as Album of the Week in The Independent and received 5 stars in BBC Music Magazine. Subsequent recordings of Schubert duets and piano music by John McCabe have met with similar critical acclaim including glowing reviews in the Sunday Times, Gramophone and International Record Review.

A number of composers have written new works for the duo including Dai Fujikura, Robert Keeley, Nicola LeFanu, Edwin Roxburgh and John McCabe, whose piano duet ‘Upon Entering a Painting’ they premièred at Wigmore Hall in 2009 and duet version of ‘Two Scenes from Edward II’ they also premièred for City Music Society at Bishopsgate Hall in March 2013.

Their most recent collaboration is a co-commission with the Cheltenham Music Festival, funded by the Britten-Pears Foundation, of a new work for two pianos by Dai Fujikura which Piano 4 Hands premiered at the Pittville Pump Room in Cheltenham in July 2013 and at Wigmore Hall as part of a special programme celebrating the centenary of Stravinsky’s The Rite of Spring.

Joseph Tong and Waka Hasegawa were elected Associates of the Royal Academy of Music in 2008 and have twice been selected for the Making Music Concert Promoters’ Group Scheme. They are Founders and Artistic Directors of the Bristol International Piano Duo Festival, held biennially at St George’s Bristol and next taking place in March 2014. Other upcoming projects include a new commission from the British composer David Matthews and performances at the Beaminster Festival,  the 2015 Presteigne Festival, the Wiltshire Music Centre, Manchester University, Truro 3 Arts and at various music societies across the UK.

To read more about ‘Piano 4 Hands’ and listen to them play, visit their website

adjusting the number of tickets required if necessary, then press Enter (this is vital). To purchase tickets for another concert, go to its page and repeat the process. When you have purchased tickets for all the concerts you wish to attend, click on the Checkout with PayPal button. If you do not have a PayPal account, click on Check Out as a Guest to pay using your credit or debit card. (Click on dustbin symbol and start again if you make a mistake. We do not post tickets; please pick them up at the door on the night of the concert.)