This replaces our use of the previously publicised  Ribble Valley Borough Council Civic Suite,
which is no longer available to us because of the General Election the following day.

This is our Summer Concert. There are NO tickets; admission is by donation on the night 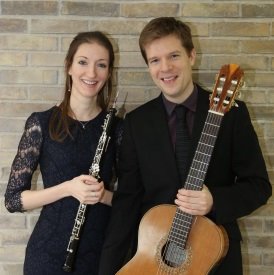 Stephanie Oatridge (oboe) received a distinction for her Postgraduate Diploma from the Royal Academy of Music, where she was awarded the RAM Friends’ Development Award. She enjoys a varied freelance career, in both modern and period instrument performance, working with distinguished conductors, including Sir Colin Davis and Sir John Eliot Gardiner. She is equally in demand as a soloist and chamber musician, and has performed at celebrated concert venues throughout Europe.

Guitarist Adam Brown has performed throughout Europe, the United States and South America.  Training at the Royal College of Music in London was followed by post-graduate studies at the Juilliard School in New York City at the invitation of celebrated guitarist Sharon Isbin. His three solo albums, The Rebels Within, Gladios and Without Limits – An American Century of Music for Guitar, have received critical acclaim and international broadcast.

There will be a very brief AGM (it has never yet lasted 4 minutes) immediately before this Summer Concert.
Non-members, who are very welcome, are simply requested to ‘sit on their hands‘ for this short period.