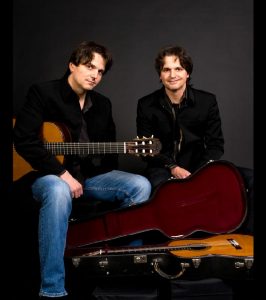 Critically acclaimed by the Daily Telegraph as “ the classical world’s best known guitar duo”, Peter and Zoltán Katona effortlessly transfer from strictly classical, into more popular musical genres. They have given recitals in the major concert venues throughout the world including performances at the Carnegie Hall, the Wigmore Hall, the Concertgebouw in Amsterdam, the Konzerthaus in Vienna, the Suntory Hall in Tokyo,and the Philharmonie in Cologne.

The wide repertoire of the duo spans from Bach, Piazzolla’s tango music to their own arrangements of pop classics. Their programmes also include concertos for two guitars and orchestra by Rodrigo, Vivaldi, Piazzolla and Tedesco. Several contemporary composers have written for and dedicated works to the Katona Twins. They have been invited on numerous occasions to record for the BBC and other international television and radio stations and have played together with renowned musicians such as Yo-Yo Ma and world class ensembles such as the BBC Concert Orchestra and the London Sinfonietta. Their CD releases include music by Scarlatti and Handel; Rodrigo; Albéniz, Piazzolla and Manuel de Falla. To visit their website and see and hear them play click here.

Peter and Zoltán were born in Hungary, are German citizens and live in Liverpool. They previously played for Clitheroe Concerts Society on 3rd February 1999.

Due to unprecedented demand, advance ticket sales for this concert have been suspended. There may be some at the door on the night if any members fail to attend.

Please note that the pieces by Bartók and Kodály, included in the original programme, and still shown in out trifold leaflet,
have been replaced by a composition by Peter Katona and a second item by de Falla.