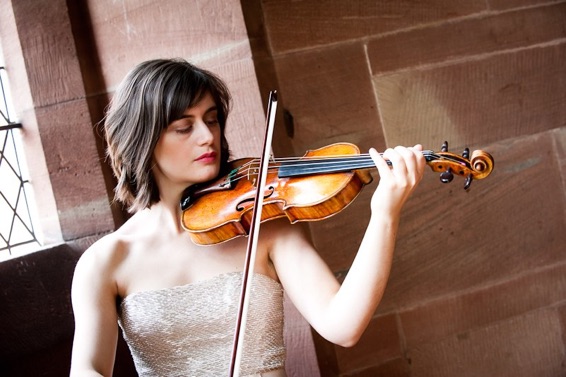 One of the UK’s most exciting violinists, Sophie Rosa was awarded the Second Prize and Audience Prize at the 2nd Manchester International Violin Competition 2011. She has performed across the UK as a recitalist in venues including the Royal Festival Hall, the Purcell Room and Bridgewater Hall as well as performing live on air for BBC Radio 3. Sophie has recorded at Champs Hill Records and appeared with the Royal Liverpool Philharmonic Orchestra and the Manchester Camerata.

Sophie has performed regularly throughout the UK and internationally from a very young age. An early highlight was a solo concerto for HRH Princess Margaret when she was just seven years old. In 2006 she was a finalist in the BBC Young Musician of the Year Competition and was the First Prize winner of the Lions European Music Competition, Cannes. Sophie studied at Chetham’s School of Music and the Royal Northern College of Music. She was a recipient of the RNCM Gold Medal and was also awarded the Worshipful Company of Musicians Silver Medal in recognition of her musical achievements. Sophie was also a recipient of the prestigious MBF Ian Fleming Charitable Trust Award. After completing her Masters Degree with Distinction, Sophie completed the RNCM International Artist Diploma in Solo Performance and furthered her studies in America where she has been mentored by Midori Goto, Miriam Fried and Donald Weilerstein.

Sophie is grateful to the Stradivari Trust for their assistance with acquiring a fine Gagliano violin for her career through a syndicate trust.

Committed to contemporary music, he has been the pianist in Ensemble 10:10 since the group’s inception, and his piano duo with Richard Casey specialises in music from the last and current centuries. He frequently collaborates with former Poet Laureate Andrew Motion performing recitals of piano music and poetry, and he is a member of the piano-and-wind group Zephyr, Cerberus (trio with clarinet and cello); and the Elysnan Horn Trio, formed when students at the Royal Northern College of Music.

Committed to contemporary music, he has been the pianist in Ensemble 10:10 since the group’s inception in 1997 and his piano duo with Richard Casey specialises in repertoire from the last and current centuries.  As an accompanist he is in frequent demand, performing and recording with singers and instrumentalists throughout the U.K. and in Europe, appearing in the Beethoven festival in Bonn and the Festspiele Mecklenberg with the former BBC Young Musician winner, clarinettist Mark Simpson. Ian regularly plays piano in the RLPO and the John Wilson Orchestra, and teaches at the Universities of Leeds and Liverpool.