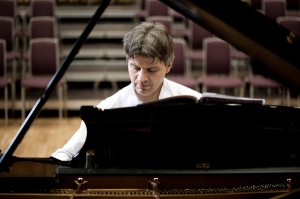 The critical plaudits which have greeted Mark Bebbington’s performances and recordings have singled him out as a British pianist of the rarest refinement and maturity. Increasingly recognised as a champion of British music, Mark has recorded extensively for SOMM “New Horizons” label to unanimous critical acclaim. His most recent CDs – four British Piano Concertos with the City of Birmingham Symphony Orchestra, a premiere recording of Arnold Bax’s Piano Concertino coupled with John Ireland’s Piano Concerto and Legend with the Orchestra of the Swan, and premieres of Vaughan Williams’ Fantasia and William Mathias’ first two Piano Concertos with the Ulster Orchestra – were released in 2011 and have met with rapturous acclaim.

In addition to concerto recordings, Mark continues his John Ireland and Frank Bridge solo piano series; five consecutive discs have each earned him 5 stars in BBC Music Magazine and International Piano summed up his achievement in May 2012:-“Bebbington’s revivals of British piano music are second to none; he could well be dubbed the concert pianists’ Richard Hickox. Bebbington has almost single-handedly demonstrated that 20th-century British piano scores have an exciting role to play in the concert hall and recording studio.” All these CDs are initial releases in an ongoing series of recordings at Birmingham’s Symphony Hall, where Mark has the distinction of becoming the first solo artist to record.

Over recent seasons Mark has toured extensively throughout Central and Northern Europe (both as recitalist and as soloist with many of the world’s leading orchestras), as well as the Far East and North Africa. Within the UK, he has appeared in concertos with the London Philharmonic, Royal Philharmonic and Philharmonia Orchestras, the London Mozart Players and the Orchestra of the Swan. He has featured both as soloist and recitalist on BBC Television and Radio and also on major European Television and Radio networks.

Mark studied at the Royal College of Music where he was a recipient of numerous international awards and prizes, including a Leverhulme Scholarship, a Winston Churchill Fellowship and the Ivan Sutton Recording Prize – the latter awarded to the one outstanding graduate of the combined London Music Colleges. He later studied in Italy with the legendary Aldo Ciccolini.

Mark’s programming demonstrates a commitment to the music of our time and he regularly includes contemporary composers as diverse as Takemitsu, Julian Anderson, John McCabe, Ian Venables, David Matthews, Pierre Boulez and Elliot Carter in his recital series. Projects for 2012/13 include continuing releases for the Somm label of both twentieth-century British piano music and further concerto recordings with the Ulster and City of Birmingham Symphony Orchestras, appearances in major concert series and festivals both in the UK and throughout Europe (including a debut at the Husum “Piano Rarities” Festival in Germany and the Grand Theatre – Opera National de Bordeaux as part of the Bordeaux International Festival), concertos with the Philharmonia, Royal Philharmonic and BBC Concert Orchestras and London solo recitals at the South Bank, St John’s Smith Square and the Wigmore Hall.

To hear Mark play and to read further details about the many albums that he has recorded click here. Once the page opens, click on any of the album covers shown; some of them have two or three short musical extracts.