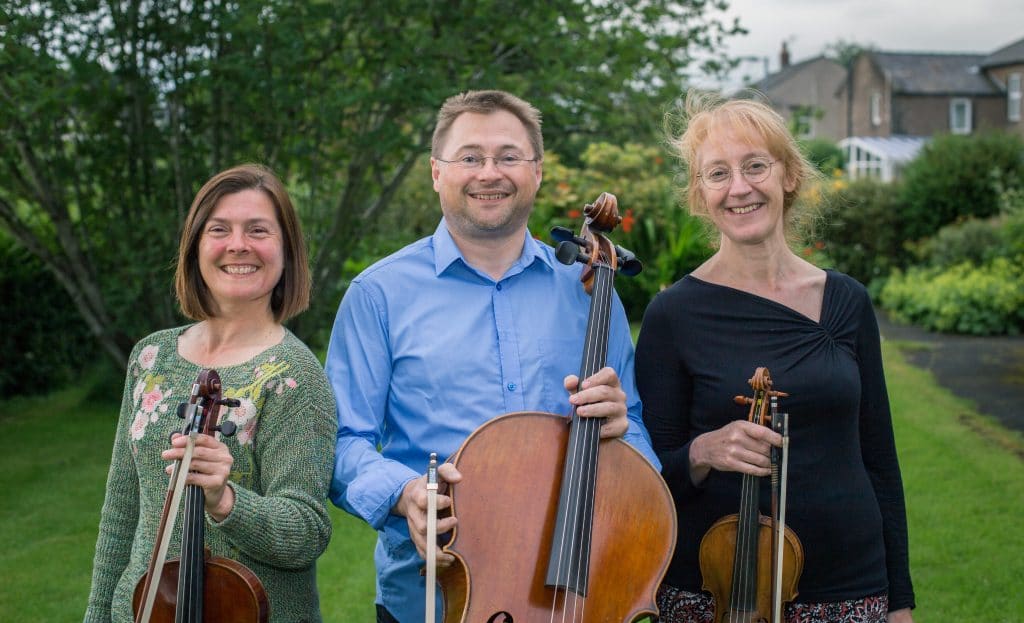 All three artists are professionaly trained musicians who have/had other careers in addition.

Pamela has many years experience playing and performing as a chamber and orchestral musician. In her youth she was leader and soloist with the National Youth Orchestra of Scotland and deputy leader  of the National Youth Orchestra of Great Britain. Since then she has continued to play chamber music in a semi-professional capacity despite having qualified in medicine.

Once her children went to school she decided to remain part time as a GP so that she could devote more time to music, furthering her studies with tutors from the Royal Academy of Music. More recently she resigned he job as GP to focus more intensively on studying the violin and so attended the Royal Northern College of Music as a mature student over a 2 year period.

Pamela currently heads the Westmorland Orchestra as well as various ensembles for choral society concerts in Cumbria. She also performs as a soloist and in various chamber ensembles, including the Eberle Quintet and Eberle Trio and is in demand as a local freelance violinist. She enjoys a little private violin teaching and has been coaching the violins in the Westmorland Youth Orchestra since 2017.

Alison is an experienced orchestral and chamber player. She turned professional in 2009 after completing a post-graduate diploma the Royal Northern College of Music. Since then she has appeared regularly with the Halle Orchestra performing with them  in 2013 at a Promenade Concert at the Albert Hall under the baton of Mark Elder. She has played in several recordings with the Halle, including their recent live Elgar ‘The Apostles’ CD. She also freelances for Manchester Camerata.

Whilst at the RNCM, Allison played regularly in the RNCM orchestras as lead or sub-principal viola, to tour with them to Italy. She has also played lead viola in many of the orchestras in the North West, including the Haffner Orchestra in Lancaster for four years and the Liverpool Mozart Orchestra.

Allison is also a qualified Chartered Accountant, running her own accountancy and tax practice for the past sixteen years.

Born in Clitheroe and a former student at Clitheroe Royal Grammar School, Robert studied at the Royal Northern College of Music with Emma Ferrand, prior to becoming a freelance IT consultant.

He currently performs with many professional string quartets as well as playing for a variety of local orchestras and choral societies in Lancashire and Yorkshire. He toured China with the Slaithwaite Philharmonic Orchestra, fortunately returning in early January before the coronavirus became so widespread in that country. Robert is also a session musician, performing and recording with various folk and popular music bands, with some chart success.